If we want to live healthy lives, we need to know the nature and content of undesirable chemical elements in our environment. If a municipal council wants to clean up a piece of land to develop a new suburb, it needs to know whether heavy metals or toxic substances such as arsenic remain in the soil from the previous use of the land. Likewise, the managers of drinking water sources, surface water bodies and fishing areas need to know about the quality of their water, to determine whether it contains excessive levels of undesirable substances that will have to be removed. And in order for air quality to be considered good, the trace element content in the solid particles floating in the air must not be too high.

Outside of the environmental field, there are other places where it is helpful to be able to identify and quantify the elements that are present – such as establishing the concentration of metal in lubricating oil to determine how quickly an engine will wear out, or the concentration of fertilizers in agricultural soil to determine whether additional fertilizer is required. Flow meters and regulators also play a major role here. As an industry specialist in the analytical market, allow me to explain how it all works.

As you can see, there are many applications in which it is useful to know what chemical elements are present and in what quantities. ICP-AES is a good analytical technique for measuring the nature and concentration of elements in solids, liquids and gases. This acronym stands for Inductively Coupled Plasma – Atomic Emission Spectrometry. Due to its high accuracy – up to the ppb (parts per billion) range – ICP-AES is particularly well suited to analysing trace elements, i.e. very low concentrations. This technique is excellent for detecting metals (such as mercury) and metalloids (such as arsenic), and dozens of elements can be analysed simultaneously. But what is behind this technique – and how does the careful delivery of gases play a role?

Controlled supply of argon gas through a flow regulator

The short version: The ICP-AES method of elemental analysis uses an inductively coupled plasma to produce excited atoms and ions of the elements in the sample to be measured, whose characteristic spectrum is measured using atomic emission spectrometry (AES) as they return to their ground state. The intensity of the lines in the spectrum is directly proportional to the concentration of the elements in the sample.

The ICP-AES equipment can only analyse samples in liquid form. That’s not really a problem for water, but things get a bit tricky with soil samples and other solid substances. To unlock the chemical elements, you have to dissolve the sample in a strong acid: aqua regia, a mixture of hydrochloric acid and nitric acid. A peristaltic pump sucks the sample liquid out of a storage vessel and transports it to the nebuliser, which turns the liquid into an aerosol form or mist. To accurately regulate the concentration of the mist – and to dilute it if necessary – a flow of argon gas is supplied to the nebuliser, with the assistance of a flow regulator. The mist then enters the reactor chamber, where it collides with the plasma that is already in the chamber.

If you supply a gas with sufficient energy – by passing a high electrical voltage through the gas using a coil – then some of the gas atoms release electrons. In addition to the original gas particles, you now have a mixture of negative electrons and positively-charged ions. This ‘ionised gas mixture’ of charged particles is called a plasma; plasma is considered to be the fourth state in which matter can exist, in addition to the solid, liquid and gaseous states. With ICP, argon gas forms the basis for the plasma, and this gas must be supplied with great precision, using flow regulators. The plasma has a very high temperature of around 7000 degrees Celsius. Because the plasma must have the correct composition at all times, a precise and continuous flow of argon gas is important. And to protect the outside world from this high temperature, a cooling gas (often but not always argon) is channelled around the outside of the reactor.

When the mist with the chemical elements to be measured collides with the plasma, these elements are also converted into plasma. The elements absorb so much energy that they enter an excited state. Elements don’t like to be in an excited state, so they try to return to their ground state at a lower energy level. During this transition, the elements emit radiation that is characteristic of each element. This radiation is measured by a spectrometer, and the intensity of the measured radiation is directly proportional to the amount of the element in question in the sample. Since each element has its own characteristic set of wavelengths of the emitted radiation, you can use this technique to identify multiple elements at the same time. And if you have a calibration curve for the elements concerned, or if you entered an internal standard into the nebuliser earlier in the process, then you can also quantify these amounts.

The spectrometer within the AES part is a combination of mirrors, prisms, bars, monochromators/polychromators and detectors, which guide and ultimately measure the emitted radiation. To prevent any disruption to this process – such as the absorption of radiation by gases containing oxygen – the area where these optical objects are located is continuously flushed with nitrogen. This gas flow does not have to be very precise, but it does have to be highly reproducible. The use of flow regulators is essential to ensure this reproducibility. Incidentally, you may come across the term ICP-OES (optical emission spectrometry), which is an alternate name for ICP-AES (atomic emission spectrometry). These are two different names for the same technology. 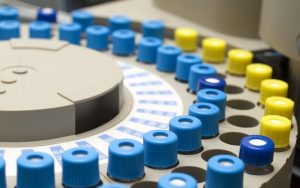 ICP-MS is a similar technique for elemental analysis; the biggest difference is that the method of detection is not optical. The charged particles from the plasma enter a mass spectrometer (MS); here, they are separated on the basis of their mass-to-charge ratio, and the relative ratio of each of these charged particles is recorded. ICP-AES is performed at atmospheric pressure, but ICP-MS requires a vacuum. The detection limit for ICP-MS is lower than for ICP-AES.

In an environmental analysis, you can look not only at the total quantity of an element in a sample, but also at whether the element occurs in its free form or as a component of a chemical compound. By way of illustration: inorganic arsenic compounds are often more toxic than their counterparts in organic compounds. You can use ICP-AES and ICP-MS to distinguish between different forms of elements, a process known as ‘speciation’. However, this requires the different forms to be separated from each other before the ICP process, for example through ion exchange chromatography (IC). For this reason, the IC/ICP combination is very common. 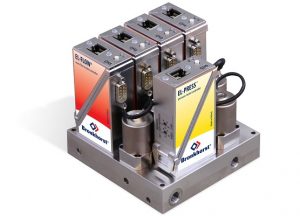 When ICP was first invented, the gases were added manually. When ICP became automated gas regulation was automated too, and mass flow meters were introduced. Mass flow meters and flow regulators are devices used in ICP-AES to supply inert gases. If you have good gas regulation, the entire system is more accurate and more stable, enabling lower detection limits. Which is helpful, given the increasingly strict quality and environmental standards.

Bronkhorst supplies flow meters for the analytical market; our customers include a number of large suppliers of analytical equipment. These customers are often supplied with specific ‘manifold’ solutions. In these solutions multiple functionalities are integrated into a single body, custom built for the customer. Compact instruments with small footprints are becoming more and more important in laboratories where space is increasingly restricted. 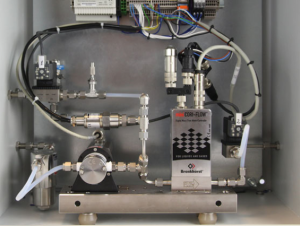 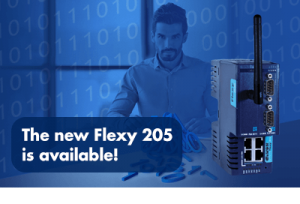