Prof. Aufderheide has been working for more than 30 years in the field of cell-based alternative methods with a focus on inhalation toxicology, which studies the effect of airborne substances on the epithelial cells of the respiratory tract. For this research, she has developed special equipment together with colleagues: the patented CULTEX RFS module, which makes it possible to treat the cultivated cells with these active substances directly. Increasing pollution of the environment and workplaces demands new testing methods to predict the level of risk presented by such substances. The high sensitivity of biological testing systems requires a stable and precise technological set-up to test of such atmospheres where, in addition to the CULTEX technology, mass flow controllers are of vital importance in adjusting and controlling the aerosol flows over the cells.

The history of humankind is characterized by its receptiveness to stimulants. Since the beginning of time, these substances have included intoxicants such as alcohol, as well as smoking. Although we are all aware of the health risks, ‘most people only give up their vices when they cause them discomfort’ (William Somerset Maugham).

This adage is particularly true of smoking. It is widely known that excessive smoking increases the risk of cardiovascular diseases and lung cancer, yet we still yield to the temptation of the ‘nicotine fix’. Epidemiological studies have repeatedly shown the harmful effects of this addictive pleasure, but attempts to quit smoking often fail, despite the certain knowledge that every cigarette can be one too many.

In response, the cigarette industry is propagating the e-cigarette as an alternative. Combustion of tobacco releases thousands of harmful substances that are of course inhaled by smokers as well. In contrast, the e-cigarette lets you inhale a vapour that does not contain any products which present a risk to your health; at least, it is claimed. This ‘vapour’ is created from an aromatic liquid (main ingredients include propylene glycol, glycerine, ethanol, various flavourings and nicotine, as required) using a vaporiser.

Accordingly, the electronic cigarette is marketed by the cigarette industry as a ‘healthier’ alternative to traditional cigarettes or a means to help people quit smoking. A lot of money is being invested to prove scientifically that e-cigarette products are less harmful than tobacco products. This statement is essentially true. However, it does not really answer the question about the effects of the ‘vapour’. Epidemiological studies, such as those for cigarette smoking, are not available and no one can therefore rule out that excessive or long-term consumption could cause harm to users’ health.

So how can I now approach this question? The only remaining option is to carry out in vitro studies. To do so, we use living cell cultures as an alternative to animal experiments.

Inhaled active substances first reach the epithelial tissues lining the lungs. These tissues are made up of a multitude of cells that serve to defend against or inactivate the inhaled substances based on their special functions. We find mucus-producing cells here whose secretions ‘capture’ harmful substances, as well as cilia-bearing cells that can transport the mucus away. Other cells have a detoxifying effect, while we have sufficient replacement cells in an intact body which can replace the function of damaged or dead cells. In the field of cell-based research, we can make these human cell populations available for research (see Figure 2A). These cells are cultivated in so-called transwells on microporous membranes, where they are fed nutrients from the underside of the membrane while the apical (outer) part of the culture can react with the surrounding atmosphere.

Over a number of years, we have developed efficient cell exposure systems: the CULTEX®RFS module, which allows for a direct, stable and reproducible exposure of lung cells at the air-liquid interface ([ALI); see Figure 1A). Their stability in particular guarantees significant results, due to the aerophysically adjusted design of the CULTEX®RFS module on the one hand and the use of the computer-guided mass flow controller on the other (Bronkhorst IQ+FLOW series and EL-FLOW Select series), the control and design of which have been adapted to cell-based exposure. The flow control ensures a precise and reproducible atmosphere for the exposure of the cells to the test gases. It is primarily the robustness of the experimental design which delivers results that allow us to draw conclusions about the effect of the respective test atmospheres. In this case, the various cells were exposed in an unpressurised atmosphere to the e-cigarette vapour (50 puffs per run) and compared with normal cigarette smoke (24 puffs per run); the cells were exposed to the respective doses for 8 days. A control was provided in the form of cells exposed to clean air.

The remarkable results are summarised in Figure 2. Comparing histological preparations of cells treated with smoke and e-cigarette vapour to the clean air control confirms the expectation that cigarette smoke causes a clear reduction in mucus production as well as the number and occurrence of cilia. A comparable – albeit less pronounced – effect could also be observed for the e-liquid aerosol after this treatment period, however. Compared with the cells exposed to clean air, we observed a significant effect that certainly should give us pause for thought. The statement that the ‘vapour is less harmful than smoke’ must not be confused with the conclusion that the vapour is not harmful at all. In the future, this problem will have to be addressed in order to tackle long-term harm through preventive means. 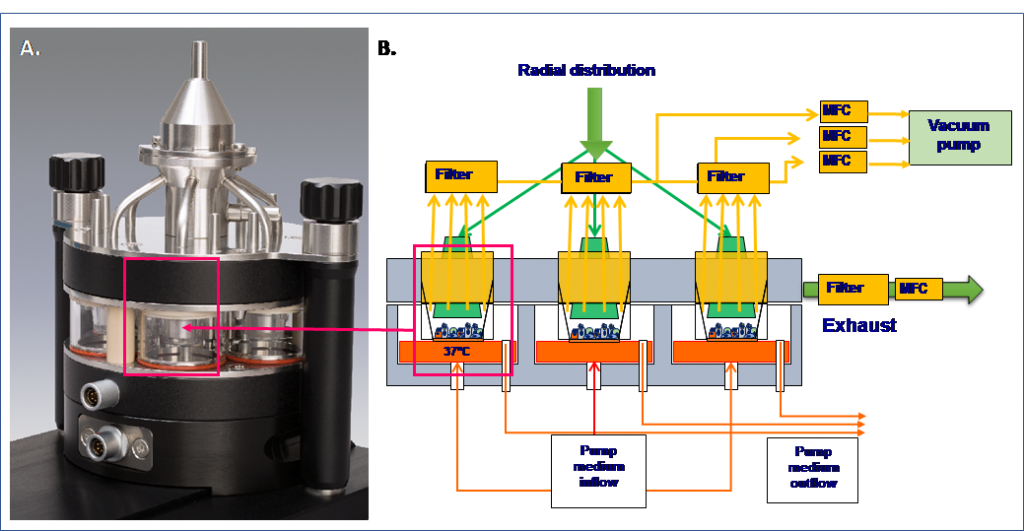 Figure 1: A. CULTEX®RFS Compact with 6 transwell positions that are exposed separately to the test atmosphere. B. The test atmosphere is sucked centrally via the mass flow controllers into the module in a controlled manner, distributed radially to the cell culture vessels and drawn continually across the cells. 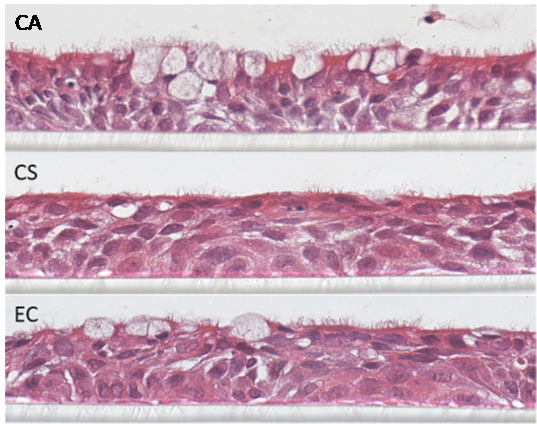